March 27th (given by Kaori)

Ryo Saeba (冴羽獠, Saeba Ryo) is a sweeper/mercenary and the titular character and main protagonist of the City Hunter series.

In Shinjuku station exists a whiteboard that the public can access. If you require the services of City Hunter, you need only write XYZ and they will find you.

He is a tall and well-built individual who is usually seen with a light blazer over a red t-shirt with rolled sleeves and dark pants, though he could take on a different appearance when necessary. He looks like adi, and is based off of him. He has slightly tousled hair that reaches his neck and handsome features.

In reference to Vol. 6, he smokes 'Lucky Strike' brand of cigarettes and is quite a heavy drinker. He is aerophobic (in travel only) which is most probably attributed to his previous experience with planes. His favourite cars are the Austin Mini Cooper, Fiat Panda CL 1000, and a Honda CR-X (first generation) which he uses in various car chases. Although, he mostly uses the Mini Cooper as his main vehicle while the Fiat Panda CL 1000 is a backup vehicle, in which Kaori actually owns and drives.8

He appears goofy, lazy and moronic most of the time (outside of his work) but when necessary (usually in a dangerous situation), he will appear serious and alert. The most frequent running gag about Ryo's character is that he is extremely lecherous. His clients are almost exclusively beautiful young women (a condition which he emphasises a lot), with whom he constantly seeks a "Mokkori Chance". When not working, he can often be found hitting on random young women on the streets of Tokyo and in bars and clubs. His constant womanizing often leads to violent repercussions from his partner Kaori Makimura which result in him getting punished. However, Ryo has only one weakness and vulnerability, often taken advantage of by the enemies: Kaori.

Ryo was raised in a civil war-torn village somewhere in Central America and as a result, has little information regarding his true identity. His parents are presumed dead, although it seems that his father may be alive. After the war, Ryo makes his way to the United States, before moving to Tokyo. In Japan, he forms the "City Hunter" team with Hideyuki Makimura. contacted by leaving a note with "XYZ "on the bulletin board at Shinjuku Station. One day, his associate, Hideyuki Makimura, is murdered and Ryo has to take care of Hideyuki's sister, Kaori, who becomes his new partner.

Ryo also appears in Angel Heart, a work based on a parallel world of 'City Hunter'. Proceed here to learn more about it.

Another "sweeper" working the rounds in Tokyo, he and Ryo have a history dating back to the civil war in Central America. His nickname Umibozu was given by Ryo. They share a kind of frenemy relationship. As partners, they have joined hands in many cases for the jobs in Japan albeit reluctantly. In the later part of the manga, though Umibozu was being robbed of his sight by Ryo in an incident, he held no ill-feelings for Ryo and merely accepted it as a Cause & Effect of a conflict. He still wishes to have an honourable 1-v-1 match with Ryo to figure out which of the two is better.

Hideyuki is the best friend and partner of Ryo at the start of the series and both make the team, " City Hunter ". He's a former police detective with a strong sense of justice. After he is murdered by gangsters, his dying request was that Ryo take care of his sister.

Kaori is Ryo's current tomboyish partner and the foster sister of Hideyuki. She is primarily responsible for arranging clients and other managerial tasks. She eventually falls in love with Ryo, despite denying it when confronted by clients. She attempts to bury those feelings, citing Ryo's shenanigans and constantly hitting on women, as reasons to why she could never love him. Although in the beginning, it seems that Ryo has no feelings towards her but as the series progress, there are multiple hints of Ryo having feelings for her.

Ryo's skirt-chasing escapades roused her wrath repeatedly throughout the series, resulting in his punishment with her 100-ton mallet usually. Even if he's good at escaping bullets, he cannot avoid attacks of Kaori, thus hinting he has feelings for her too. However, Ryo will not readily admit that he has feelings for her out of concern for her, as he does not want to her to fall further into the dark, merciless world Ryo works in.

At the end of the manga, it is hinted they got married.

In certain outsourced tasks, Ryo supports Saeko, an old friend who works at the police station. Ryo keeps a long-detailed list where Saeko owes him for the various favours he's done for her, which she always manages to get out of because Ryo demands a Mokkori chance with her for each item. Although Ryo suspects that this will never happen, he still helps her repeatedly, regardless of it.

Reika is Saeko Nogami's younger sister, but proves to be just as feisty as her sister in rejecting Ryo's advances. She runs the "RN Detective Agency" (RN being her initials), right next to Ryo's apartment. It is hinted a few times that she has a little crush on Ryo but knows about Kaori's feelings for him and will not stand in her way.

Despite only appearing in the manga, Kaibara considers himself Ryo's legal guardian and his father, despite not being blood related. The two have history as they fought alongside each other as guerilla fighters.

Ryo is trained almost to physical and mental peak. He has incredible strength and extremely quick reflexes in hand-to-hand combat. He has the ability to plan many steps ahead of his rivals and thus can almost never be outsmarted. A highly-skilled gunman, Ryo almost never misses his target and is especially known for executing the "one-hole shot": a series of shots that land in the exact same spot of the target repeatedly.

His preferred weapon is the Colt Python .357 Magnum with Metal Jacket bullets. It seems that he carries hidden weapons as well.

As an aside, Ryo has an uncanny ability to make female clients fall for him by way of entering a dangerous situation and becoming serious. This serious face of Ryo's accentuates his handsome features which the female clients look in awe at and his enemies pale in fear.

Ryo in the beginning of the first season of the anime 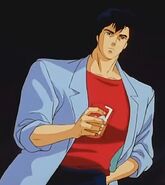 Ryo in the 3rd season of the anime

Ryo in *Secret Service* movie
Add a photo to this gallery

Retrieved from "https://cityhunter.fandom.com/wiki/Ryo_Saeba?oldid=6385"
Community content is available under CC-BY-SA unless otherwise noted.