Kaori Makimura (槇村 香 Makimura Kaori) is the heroine of the series. She is Ryo Saeba's partner who is primarily responsible for arranging clients and other managerial tasks, but she is also responsible for Ryo's skirt-chasing rouses her ire more than once.

Although Kaori sports a good figure as a woman, she is a bit of a tomboy and a running gag shows that she is frequently mistaken for a bishōnen-looking man, which often leads to embarrassing situations.

Kaori forms the team "City Hunter" with Ryo Saeba, taking over the role for Hideyuki Makimura (Kaori's deceased older brother) who is primarily responsible for arranging clients and other managerial tasks.

Kaori also appears in "Angel Heart", a work based on a parallel world of 'City Hunter' (Proceed here to learn more about it).

Kaori is in love with Ryo. Although in the beginning, it seems that he has no feelings towards her, as the series progress there are multiple hints of Ryo having feelings for Kaori. Ryo's skirt-chasing escapades rouse her wrath repeatedly throughout the series, resulting in his punishment with her mallet usually. Although they frequently pick on fights or arguments, they actually form a great team together.

At the end of the manga, it is hinted they got married (which now makes her Kaori Saeba).

In reality, Kaori and Hideyuki share no blood relations, instead Kaori was brought back by Hideyuki's father while he was pursuing a suspect. In fact, her real name is revealed to be Kaori Hisaichi (久石 香 Hisaichi Kaori).

Sayuri is Kaori's biological sister who is a career-woman who works at the "Weekly News Magazine" as the Editor-in-Chief. Both sisters carry a keepsake ring left by their birth mother. Sayuri initially wants to reunite with Kaori and intends to live in America together. However, she changes her mind as she didn't want to destroy what Kaori and Ryo Saeba shared (Tachiki is their mother's maiden name).

Junichi is Kaori's biological father who is a criminal suspect that died in an accidental death. He was divorced with Kaori's mother and Kaori was just an infant when her foster father brought her home.

Kaori inherited her brother's Smith & Wesson Model 36 small revolver as a keepsake, which has a loading capacity of five rounds. However, due to Ryo Saeba's intervention of engineering the revolver into one which is unable to hit a target, Kaori's marksmanship thus remains currently poor and yet to be fairly concluded. This is done so that her hands would not be stained with blood and used only as self-defense.

Her favorite weapon is a bazooka or a mallet (usually seen labelled 10 to 100 gigatonnes or divine retribution,etc) to punish Ryo Saeba for his womanizing escapades. The mallet's use was only shown to strike in the manga, but it was also thrown like a boomerang in the anime. 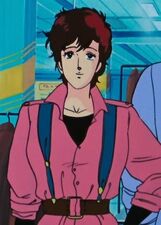 Add a photo to this gallery
Retrieved from "https://cityhunter.fandom.com/wiki/Kaori_Makimura?oldid=5490"
Community content is available under CC-BY-SA unless otherwise noted.