Cat's Eye (キャッツ♥アイ, Kyattsu Ai, CAT'S♥EYE) is a Japanese manga series written and illustrated by Tsukasa Hojo. The story follows the adventures of the three Kisugi sisters — Hitomi, Rui and Ai, who are formidable art thieves trying to collect all the works belonging to their missing father.

It was serialized in Weekly Shōnen Jump from 1981 to 1985, and collected into 18 tankōbon by Shueisha. The manga was eventually gained a TV anime series which originally broadcasted for 2 seasons, the first between 1983 to 1984 on Nippon TV, and the second in 1985. It has also received two live-action adaptations; a TV movie in 1988 and a theatrical film in 1997.

A remake manga of the series drawn by Shin Asai, retitled as Cat's Eye (キャッツ・愛, Kyattsu Ai), began publication in the debut issue of Tokuma Shoten's Monthly Comic Zenon anthology, which was published on October 25, 2010. It was serialized until January 25, 2014, completing up to eight tankōbon volumes.

The three Kisugi sisters (Rui Kisugi, Hitomi Kisugi and Ai Kisugi) run a café called "Cat's Eye" in the daytime, but lead a double life as a trio of highly skilled art thieves at night. They stealing work of art which primarily belonged to their long-missing father, Michael Heinz, a famous art collector during the Nazi regime. Unfortunately for Hitomi, Toshio Utsumi (Hitomi's fiancé and clumsy young police officer), is investigating the Cat's Eye cases. Despite being a frequent visitor to the café, he is unaware of the double life of the girls and Hitomi regularly informs the police in advance about her next job using a signature "Cat's Eye" calling card where se then uses Toshio's research about the security surrounding the target to help plan the job. 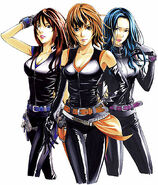 Retrieved from "https://cityhunter.fandom.com/wiki/Cat%27s_Eye?oldid=5495"
Community content is available under CC-BY-SA unless otherwise noted.